Assigned To
None
Authored By
Tags
Referenced Files
Subscribers

As a non-technical high-risk user, I will need to understand how to perform basic network performance improvement or risk mitigation tasks, having to do with my network connection through Tor—without being fluent in Tor, Whonix, developer, or opsec unique concepts or language.

Sidenote: For the team, this has to be easier to execute, than the history of tickets suggests. No initial implementation is ever perfect. The existing implementation is simply too fraught and problematic, for non-technical users. None of this ask is about many of the things the existing tickets speak to; it's about isolating and surfacing basic from more advanced tasks, and using clearer language with more usable interactions, for all users to navigate towards things.

working sketch that illustrates the below concepts, not a dev-ready solution. 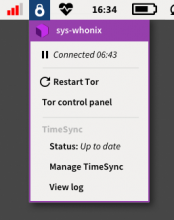 1. Clearly surface a GUI control for Whonix among the Tray icons.

2. Follow human centered design best practices for the behavior and layout of a Tray widget.

3. Where possible, show the status itself—not a link to showing a status in a window.

Tooltip should simply say Whonix, not either how to open it or other info.

That would be good. It wasn't implemented that way due to technical challenges, lack of resources. Might require changes to sdwdate itself too.

If redundant Whonix instances exist on a user's machine, build the Whonix widget enacted from the tray to elegantly handle that w/o redundant widgets showing-up.

Solving this might require solving other non-gui related issues such as T930 first.

There shouldn't be an "exit" button within a menu. That's just odd—unless it's a convention for right-click menus in Linux, but a Tray menu is not supposed to be a right-click menu.

Can be left out from left click menu but what about keeping it at least in a right click menu?

Reasons: as long as its is not perfect (such as possible/potential sdwdate-gui bugs, message spam, high CPU load, duplicate sdwdate-gui due to multiple Whonix-Gateway VMs) (also avoiding annoyance for users who don't want that systray) it is good to have an "emergency exit" (the right click exit button).

So... keeping an eye on user-needs as the priority driving this story: the list of "What needs doing" is ordered, below, as I see it:

I want to be mindful to not embrace the traditional Unix development approach, of "let's do one technical thing and do it really well." The one thing this ticket was drafted to achieve, is a goal for users—not developers. Likewise, the desired changes are requested in lieu of the feature's history—tho all the wonderful historic context provided, is always insightful. I just want to be mindful to not get lost in the history, and to instead keep focused on our goals ahead.

If we can keep our sights on user needs ahead of embracing feature benefits, I feel everything can most naturally fall into place. When we start looking at the benefits of certain features and weighing them as more or less important than the benefits of other features—or considering what's lost if a user cannot access those features—that's when we can get lost in a rabbithole of what we desire as project contributors, vs what known users are known to need.

A harsh truth, is that users really don't care what project contributors want—they just want a thing to work. Which sounds horribly blunt and rude. Especially to a project team that is clearly very, very dedicated to working hard on making a utility that many benefit from using. Many in FLOSS respond to that sentiment with "Ok, then go build your own damn tool!." Because we're all working on our tools in service to vulnerable users, I want to throw this flag with lots of hearts and smiles... only to keep us focused. Not to be a patronizing twat.

When simple user needs are prioritized, the features of a product will naturally align to those—and that's how "what we work on next" can most easily be prioritized, for tangible execution. Admittedly: using this process can de-prioritize features we all understand and know to be incredibly powerful and to pack a lot of value for users that they may not yet appreciate... but that speaks to bigger needs that exist outside the scope of what this focused ask is about. Make sense?

I am not a GUI developer at this point so please don't wait for me to implement this. sdwdate-gui is from a time when Whonix had a contributor doing GUI development.

If a patch was contributed, I would probably review and merge it.

@Patrick I am currently working on a funding proposal, to get the UX work required to get production-ready handoffs to a developer, created. The above was just a shared idea, to kickoff the conversation. My apologies for not being clear on that. I would like to work on a parallel proposal to get the development work done, to improve all of the Whonix GUI stuff; the time-sync widget menu, and the windows that enable deeper settings control.

Do you have ideas about who I might be available to _pay_ to implement a complete UX update to Whonix stuff—the sdw-date widget's menu, included in that? Also, how much abouts that might cost (hours, not currency)? Can email you directly to discuss more—but wanted the above at least shared, here, should anyone else see and wish to raise their hand to join in the fun.

and the windows that enable deeper settings control.

Both are installed by default. tor-control-panel was contributed, and
then not developed further for a while now.

Arguably, ACW has better usability for Tor config than
tor-control-panel. Therefore could even swap back tor-control-panel for
ACW if that would be better for usability. Please create a new ticket
for that if you're interested in that.

Probably no. I will think about this and contact some people but not likely.

@Patrick No biggie wrt the paid developer to implement. I like your idea on the Qubes GitHub ticket, of posting an article on the website. I'll email you separately, to coordinate on that. Said website post, I'd like to accomplish two things: one, solicit user input on any/all UX work. Two, put out the call for paid GUI dev work.

Input for UX stuff w/ Whonix, should not be announced until I have a survey setup and ready to go—so said blog post should not be published for probably a few weeks. I'll work on getting access to a Lime Survey instance, often used for internet freedom projects.

Big thank you to the clarification on how those UI elements are segmented. Will help me a lot, in writing that funding ask. More, via email. :)